So recently it was decided that we won't be putting finished exteriors into Sky_Main anymore.

A problem about it is that there is still a heavy interdependence of claims and that it would be handier to have some kind of collective file, where claims can be merged and borders and errors fixed. To name only my recent claim as an example, there is need to override cells in the current Sky_Main aswell as the dragonstar claim, which resides in the reviewing folder.

We don't have a functioning reviewing procedure around here. Things are generally discussed on discord and fixes are done directly to Sky_Main.esp. So it seems only natural to keep putting completed exteriors into a common file and have them reviewed/fixed up in there.

So, how about best handling this? Should we maintain a third file between Sky_Main.esp and Skyrim_RestExteriors.esp? Or would it be better to have a range of section files, like at TR, where chunks of exterior claims that build a logical unit are made into Section files and those getting npced and integrated with Sky_Main later?

The section file solution will take some more organisation, because you will want to have overview maps of the sections and it can be already very confusing only to keep track of the exterior claims in the first place. Only having a third in-progress file on other hand, feels dirty to me. It would be nice to receive some feedback on this topic
Top

I'd say that we should generally make one "section" file (if you want to call it that way) alongside Sky_main and Rest_exteriors that contains recent exterior _and_ interior claims belonging to the next planned release. Once the release is ready, this section file would be merged with Sky_Main and uploaded on Nexus.

Fixing things in Sky_Main directly is a pain in the *. I always become paranoid about accidentally making changes to stuff that's finished or shouldn't be touched by me. It becomes worse if you clean Sky_Main afterwards. If we work on the latest section file most of the time, I wouldn't have to deal with this paranoia unless I'd be working on previously released areas, which hopefully shouldn't occur too often.

I don't think there would ever be a need for merging files that don't belong to the next planned release. Therefore I think having multiple section files for different areas might be overkill.

My last exterior claim has a lot of interference with a number of claims across the board, including Skyrim_Main. There also tend to be conflicts or edits with neighbouring claims with other exterior claims being worked on.

In any case it's simpler to resolve all of these conflicts in a single file. Sky_Main felt very convenient as a storage for finished exteriors to me. And I personally never had these paranoia. On the other hand, it's understandable, if you or other people feel that way about it.

I only want to prevent that the exterior claims keep brooding as they are and people forget how they were meant to be combined later, which cells where overriden by which claim, etc etc.
Top

After some talk on Discord, it seems like people generally agree on handling further exteriors in organized sections. And since it's tiresome to write about x- and y-coordinates in letters, I figured it'd be best to step forth with an initial proposal for sections based on current and close-future exterior claims.

According to this proposal, we'd be clearing the second and third border mesa including their interiors/npcs from Sky_Main again and combine them with Dragonstar, Claim 8 and some cells from Claim 5, resulting in a compact, hopefully well-manageable area. 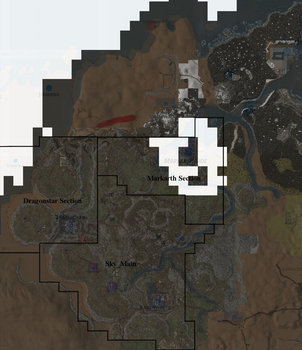 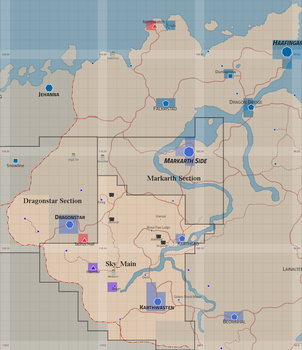