by Infragris
This is the current claim map for the Gold Coast and Gilded Hills regions:

Exterior design for the Gold Coast Region
SpoilerShow
The Gold Coast is mostly a flat region, interrupted by small hills scattered around the landscape, and a few higher cliffs here and there. There should be more cliffs in the most western parts of the Gold Coast.

Ground Textures Shading Rocks
PC_Terrain_GC_rock_01-33, feel free to use the terrain bridge, rock stairs etc, too. The cave and mine entrances are called PC_Ex_GC_Cave_exit01 and 02.
Please do not cover the whole landscape with grassy rocks near the cost, I used them only sparingly here: The northern parts of the GC should contain more.

SpoilerShow
A rocky highland on the northwestern coast. Serves as a transit region between the coastal lowlands and the Colovian Highlands. Environment is similar the Gold Coast, but more savannah-like and with some mesas and ravines in the north.

The land is craggy and uneven, with high cliffs along the coastline. Vegetation is sparse, especially where the land borders on Hammerfell. Travel is made difficult by the gorge of the Soetar River, which divides the region from the southern grasslands. The city of Sutch rests on a stone spire in the middle of this ravine. On the southern border of the region lies Lake Umbranox, source of the local salt industry. Apart from the vineyards on the southern slopes, there is little agriculture.

Ground Textures
Ground textures for the Gilded Hills (GH) can also use a couple of Gold Coast (GC) textures. Claims on the eastern border can use select Colovian Highlands (CH) textures.
Shading Rocks
T_Cyr_Terr...CH
Use crazy formations (bridges etc) sparingly. Use more grassy rocks for topside, rocky formations for gullies and canyons, hidden from sight. Top of the plateau should be sparse, not a lot of rock formations. 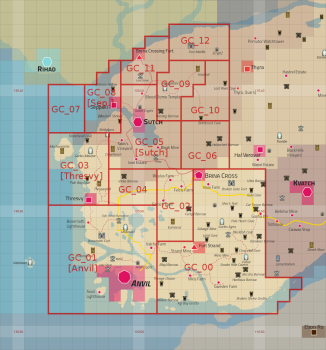 by Infragris
Exterior design guidelines for the Gilded Hills will follow as soon as the necessary assets have been cobbled together.

Don't tell me you actually gonna use this ugly ass thing

. Besides of textures having some issues, model is a bit incorrect, also flower is not right... I should've remake it

by Infragris
go for it. Flora like this can be placed, and upgraded later. do mind, that there are other flora meshes that are in dire need of an upgrade, like the grapevines

by Infragris
Updated OP with the new claim map. Please check out the exterior design notes when making an exterior!

updated op with this list
All times are UTC
Page 1 of 1
Powered by phpBB® Forum Software © phpBB Limited
https://www.phpbb.com/