Claim for buildings marked 1 on the following map 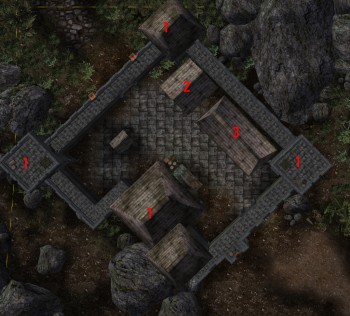 Athon Legion Fort, its towers, and curtain walls. Fort should include the usual setup of barracks, jail, armory, mess hall etc. and can also feature a couple of Legionnaire traders similar to Moonmoth.

Background: The main base of Legion operations in the Reach. Prior to the War of Bend'r Mahk, Fort Athon was located near the Skyrim/Hammerfell border. But after Skyrim reconquered/annexed a huge part of Hammerfell, the fort is now firmly within Skyrim. The Legion decided to expropriate the fortress Taurus Hall just outside of Dragonstar and repurpose it as a secondary Legion base, being closer to the ongoing conflict. Fort Athon is thus currently undermanned, suffering from splitting its troops between two forts, as well as the Tamriel-wide redeployment of Legion troops to the Imperial City. Fort Athon is mostly occupied with recruitment, but also keeps an eye on insurgent movements in the wilderness, as well as keeping the roads safe.