Although ruined, the temples of the Dragon Cult (another departure from the generally decentralised religious practices of the Nords) can still sometimes be found in use. Those near villages, in particular, may be occupied by one or two Dragon Cultists, who assist local agriculture and oversee the various rituals and rites of Alduin across the seasons. Today, the Dragon Cult is generally an institution only in rural, traditional areas.

A temple built by the Dragon Cult during the days of King Harald. Long abandoned, but once a local power centre in the early days of the Nordic Reach, predating Markarth. Could go quite deep, and should feature various rooms suited for their various rituals, as well as the living quarters of the Dragon cultists. Could also have housed a granary near the entrance. The depths should feature wall burials.

Among the farmers of the Reach, the agrarian traditions and rituals of the Dragon Cult persisted well into more recent times, even if the temple itself is forgotten and overgrown. The farmers hold a certain respect for the place, and lull old tunes when they pass it.

Will need Dragon Cult clutter made by spineinside (not finished yet). The rest of the building can be started on now. 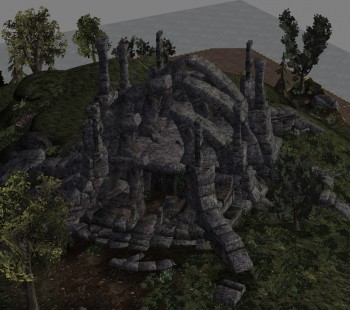