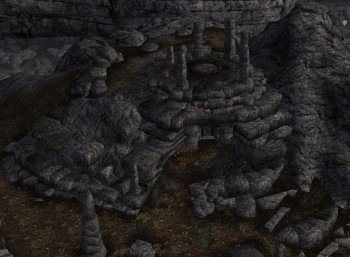 Orinshoj barrow. An ancient barrow resting on the bank of the Karth river.

Background: It was originally built as the tomb of Orin, a fabled Nordic warlord from the First Era. He is credited with leading the Siege of Elfstone Keep, the easternmost Direnni fortification erected but a few years before it was lost Nords. In popular legends and songs, it was the Elves' crossing of the Karth that angered the Nords. Historians have later pointed out that, even predating Direnni and Nord conquests, the area was the site of an annual summer market, where mostly Reachmen, but also occasionally Nedic tribes, Elves, Beastfolk and more had gathered for trading and negotiation. Controlling (and taxing) such a market must have been in the interest of the local warring powers at the time. Regardless of motive, the fortress was conquered, and Orin is thus remembered as the first king of Markarth, even if the settlement could only be called a proper city (and kingdom) many generations later.

Should feature the ancient, sealed tomb of Orin as well as the resting places of later kings, huscarls, servants and heroes. While it was used to inter later rulers of Orin's lineage as well, it has been centuries if not millennia since the latest dead was placed there. Lower levels could be partially flooded and ruined. It has been built into a rock, but the earth around it could have eroded and shifted into the river during the time passed.

It would be great the claimant could follow the circular layout in the interior.