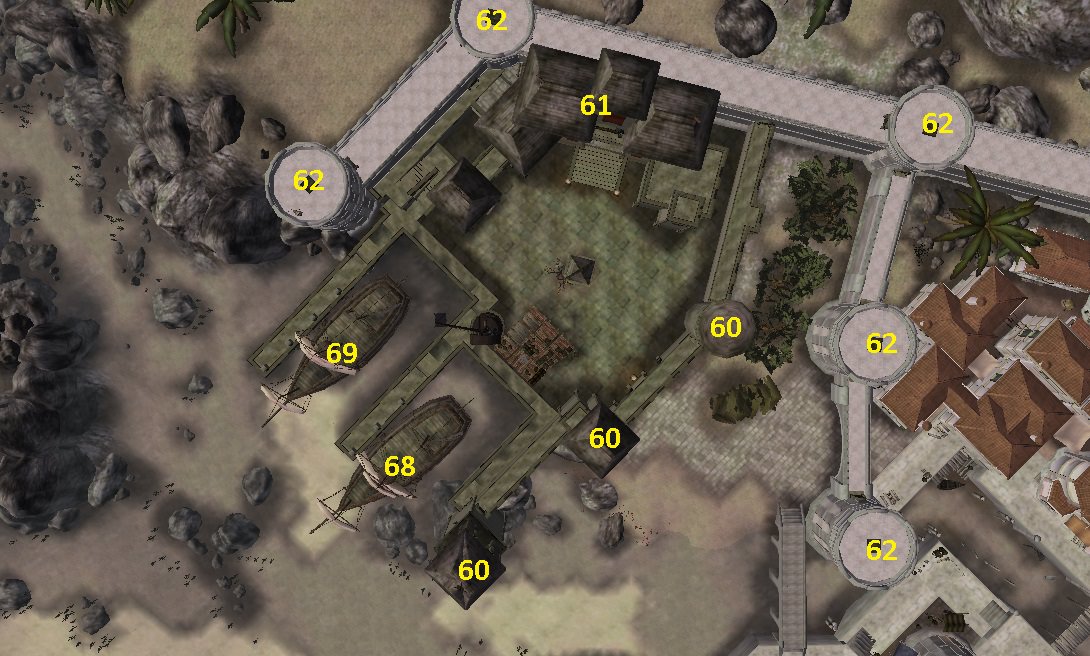 Headquarters of the West Navy, the Empire's fleet guarding the western coasts. Responsible for rooting out organized piracy and defending against any threats from the west, domestic or foreign.

61. West Navy HQ
a. Lord Admiral Miledorus Cadmerius(Imperial, m, knight): Lord Admiral of the West Navy, protector of the Abecean. Miledorus comes from Tiberiad. A capable, firm hand to ensure the sea remains free of organized piracy and firmly under the Empire’s control. Possibly involved in a quest regarding Sload activity in the area, as evidenced by increased availability of sload soap and oil.
b. Erradus(Bosmer, m, knight): Knight of the Serpent Helm, second in command to the Lord Admiral. A thoroughly imperialized Bosmer, born and raised in Bravil. The common opinion of his detractors are that he only got this station as a “safe” representative of the Bosmer population, but in reality the appointment was well-deserved.
c.Sailors
d.Marines
e.Guards


Please use the T_Imp_LegionCyr Set

The exterior file can be found in this thread.
Always use the latest file.
Top

Added 2 more doors during my GC_01 review, look at the section to see them, and if you don't want them just let me know and we can delete them
Top

This claim has not been updated for more than three months. Please provide an update within a month or this will get revoked.
Top

Sorry for the huge delay, started working on it heavily since 3 days ago, and lo and hehold:
first file with an unfinished shell of a main building and a fully cluttered tower building nearby.
The tower features small barracks (which will extend into 3rd floor of main building's left wing), storage and a sort of waiting/rest room for sailors.
Will try to continue working on it with the same tempo, at least spending 1-2 hours on the claim a day until the completion.

Update.
Entrance hall is finished and left wing is 60% done.

Started actively working on it again, so here's an update: split shell into different cells (which as it turns out solved a lot of issues I had), cluttered second floor of left wing for the most part, adjusted stuff on first floor (the path to the underground part with the chapel was going through the kitchen, which is far from ideal) and started working on 3rd floor.
Keep in mind it's messy and dirty.

Dropping.
Left wing is almost done here, only vice-admiral quarters on 4th floor and some detailing in the hall on 3rd floor left.

claiming, will attempt something here after I get further with andothren
Top

Claiming, will work through this one.
Top
Post Reply
12 posts • Page 1 of 1