It has been a long time since the last weekly progress update on Cyrodiil development. But it does not mean there was nothing made! Our project steadily moves forward in its goal to recreate Cyrodiil as a part of the TES III: Morrowind game world according to the lore presented within. Not only that but the scale of the world allows us to make Cyrodiil more vast and detailed as it ever has been in any other game. And our nearest objective is the Abacean Shores release, which includes the entirety of the Gold Coast and an update to Stirk:

Cyr_Main and PC_Anvil are the areas of future releases. You can see the full version of the map here.

The workflow is split into five departments that function as development stages. Let us take a look at everything that has happened in each of these departments since December 12th of 2020. Of course, everything you will see in the screenshots is subject to change before the release.

Concept art
Sketches, pictures, images, and photos create a foundation for what is to come and give other departments a much-needed sense of direction. It is easier for a 3D modeler or exterior developer to do their work when someone outlines the preliminary shapes and colors of what needs to be created.

That said, a lot of work was done by Infragris and others who contributed to the Cyrodiil Regions & Geography Document – a compilation of stock images and text describing the architecture, climate, nature, and cultural inspirations for all regions planned for our Cyrodiil. But there were also plenty of great individual designs made throughout the year too: 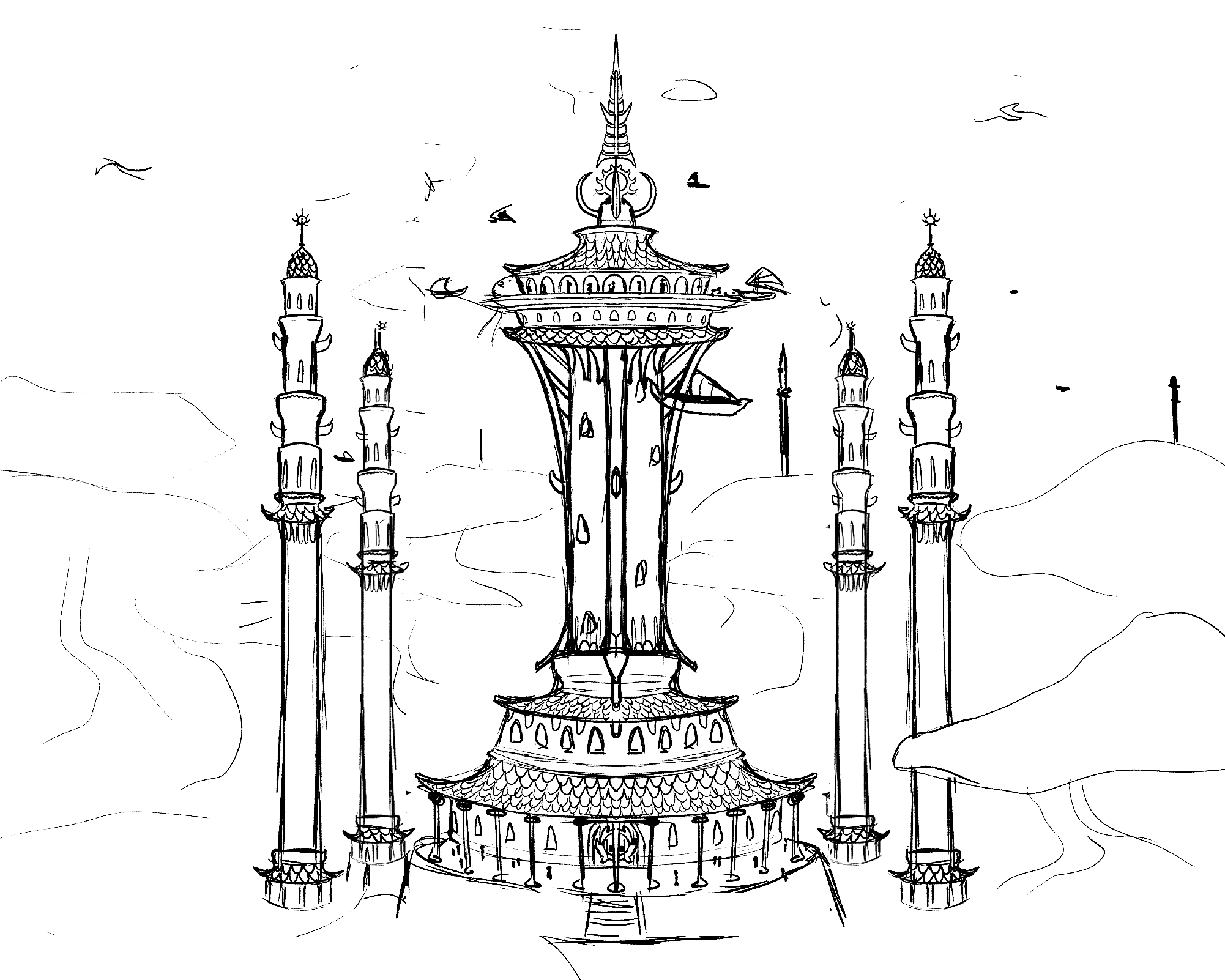 Of course, this list is not exhaustive and likely omits a lot of the great concept art that gets posted in our Discord channels almost daily.

Assets
One of the biggest challenges of Project Tamriel is that we need to create almost every asset anew. You can't build Cyrodiil out of Morrowind assets. And our 3D department is working hard indeed. Here are some examples of what has been made throughout this year and a half:
Equipment is a major element of any RPG. And TES III allows you to collect and combine its pieces with a lot of freedom. Project armorers have created a highly desired variety for all of these pieces. Many of them are based on official Morrowind artwork and look beautiful in-game:

Steel set Creature assets are my personal favorite in general. And Cyrodiil needs many of them:

Auroran Clutter items diversify the game world and make you want to check every shelf and stash in the game for new interesting trinkets:

Indulcet spoon, drug and a vessel

New bridge texture. This shot is so picturesque it almost looks like a painting.

Literature serves as a perfect means to develop and introduce the culture and lore of the province to the player. All of these books but one are written by our lead designer Infragris. Most of the descriptions belong to him too. You can read the texts by following the links below. A total of 14 literature assets have been written during this time:
The Image and the Divine — a religious text to flesh out the Great Faiths. This gives some insight into the mentality of the Faiths, and explains how they see the sub-cults and provincial pantheons. Awaits feedback.

Red Dome Temple near Sutch
Iniquities of the Current Era — a socio-political pamphlet decrying the moral decay of the modern Empire, the debased nature of the new generation, and other such evergreens. Awaiting feedback.
First of Firsts — a religious liturgical text about Akatosh. Waiting for a proper review.
Guide to the Guild Guides — part of a larger effort to define and contextualize teleportation magic within Tamrielic culture. This explains why teleportation is not more commonplace and why it hasn't had a massive effect on the way the Empire functions (yet). Reviewed by Taniquetil.
De Sphaera Nirni - an antiquated scholarly text on cosmology. Reviewed by Taniquetil.
Artificial Diseases - two volumes by a Redguard scholar who is part of the Council of Healers, an institution in the Imperial City responsible for various initiatives such as hospitals and insane asylums. Reviewed by Taniquetil.
Weir Gate Memorandum — a higher echelon document that explains how the Weir Gate, a powerful imperial teleportation device, works. Reviewed by Taniquetil.
Teleportation: Premise and Praxis — Another book in the "what's teleportation all about" series. Meant to contextualize the history of teleportation, showing that it's quite a difficult branch of magic with lots of caveats. Reviewed by Taniquetil.
Arcturianism For Beginners — This book is intended to frame the discourse around the Arcturian Heresy for our purposes. A rather dry and informative text with only a bit of bias. This is aimed at players who may not be super-knowledgeable about the background lore of Arctus and the Numidium. Awaits a review.
The Screaming Lord of Sutch — a “two books, one story” semi-rare biography of an obscure Sutch Count written by Svartalfar. Waiting for a review.
Temple Zero - A Warning — a pamphlet that criticizes the Temple Zero society. In practice, it gives us an introduction to it. A work in progress.
The Secret Throne of Vampires — a text about Cyrodiilic vampires. Will be elaborated later.
Hymns of Morachellis — flavor texts for the Lute of Morachellis present in Anvil. Morachellis is mentioned in vanilla as a notable poet of the Empire.
Black Horse Courier — a famous Imperial City newspaper. The files and scripts were made by Why at Tamriel Rebuilt for Old Ebonheart’s Bellman. The actual news, written by Infragris, still has to be implemented in the game.
Other:
P:C Heads & Hair redo – all of the project’s imperial faces redone to be on par with vanilla thanks to the joint work of Spineinside and Rats.

Exteriors
The main work in this department is already two releases ahead, in the Colovian Highlands. This is a harsh rocky region to the east of Sutch that stretches all the way to Sancre Tor and Chorrol, hugging the Hammerfellian border. Some of the most sturdy and hardworking Colovians live here. A total of 9 exterior claims in Colovian Highlands and Kvatch environs have received some progress during this period: 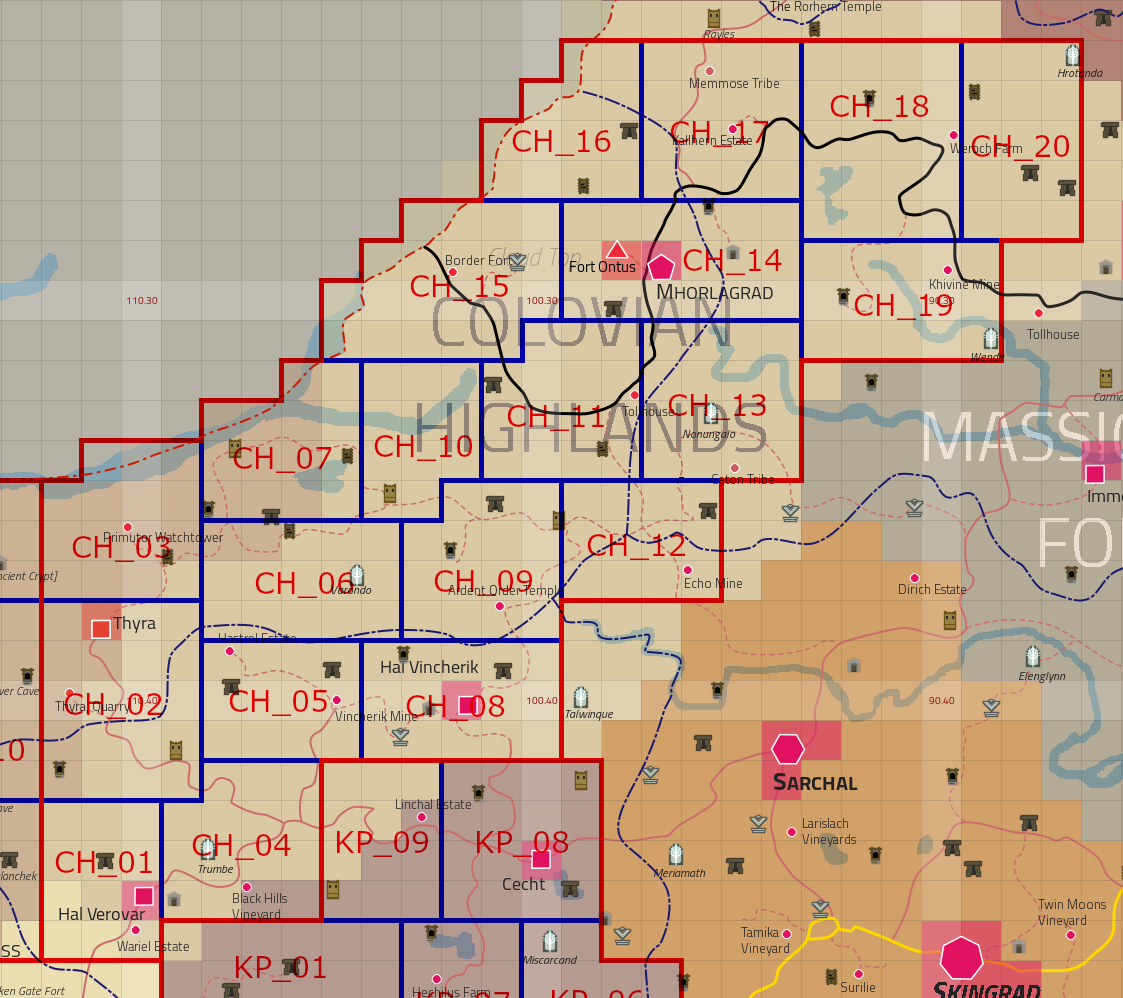 Claims of the Colovian Highlands 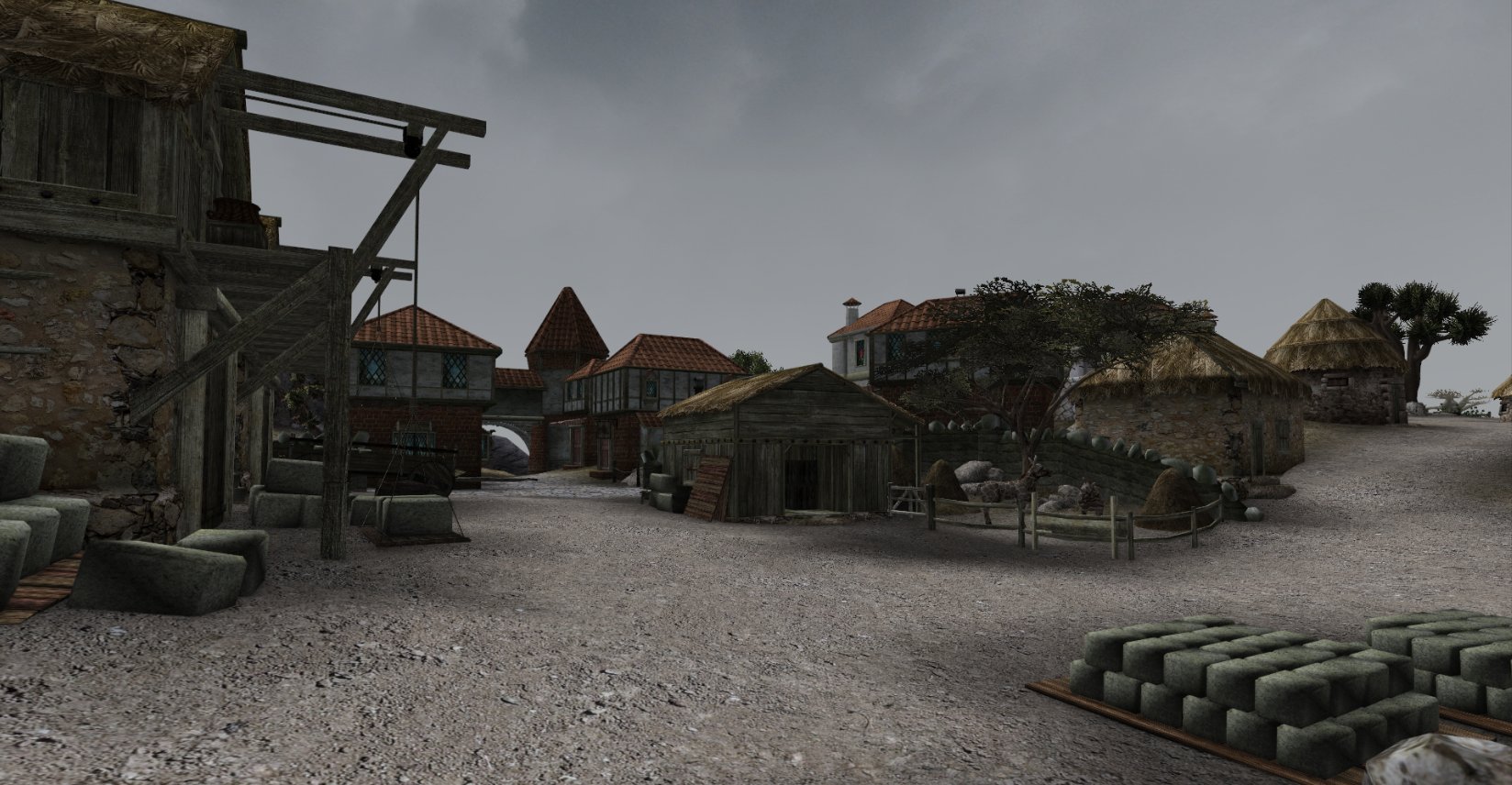 A Colovian Tomb by Roerich

A Remanite Fort ruin by Roerich

Interiors
These are the bread of the province mods, as Mojo says. A total of 53 interior claims have been worked on during this period.
Anvil is a big city that consists of over 60 buildings with two giant castles on each side, great temple halls in the middle, sprawling sewers underground, and a port full of ships. Most of its buildings were finished a long time ago, but some bottlenecks remained until recently.

Temple of Dibella
These interiors are finished but their review creates a current bottleneck:

Anvil Castle corridor
Castle Umbranox – home of Anvil countess Millona Umbranox, the biggest interior in the mod. It was built by many people at different times: the shell for all 14 interiors was created and partly cluttered by Infragris and Phenoix12, the Chapel Tower and Sewers were cluttered by Chef, the Court Wizard Tower and Vault by Roerich, the Gallery Tower and Servants’ Quarters by Mojo, the Garrison by Mark, the Great Hall and Lower Halls by Denis418, the Great Foyer by Denis418 and Roerich, the Library by Taniquetil, and the final interiors - Royal Apartments and Royal Chambers - were finished by Phenoix12 and Roerich, respectfully. Taniquetil is now attempting to review this giant place, which will open the way for many Anvil questlines to start their development.

Anvil Castle Library
Stirk was not excluded from developers’ attention either. Being the first piece of released content, the team strives to improve this island even more.

Farosh, the innkeeper, is one of the many NPCs you might know from Oblivion.
Sutch release progress:
The city of Sutch was cut from TES IV but our mod brings it back as a full-fledged settlement in the Gilded Hills region under the rule of baron Nesor Fastillius. The Interior department is steadily going through the claims of this area and the lion’s share of them are already done!

Blood Dome Temple inside
In addition to the regular claims work, Taniquetil makes touch-ups of the existing interiors in Anvil and Brina Cross to bring them to the modern standards of quality.

Quests
This is the final stage of development, barring the polishing and bugfixing. Quests are the biggest roadblock for the Abacean Shores release because there is still much to be done. For instance, all four major factions are yet to be implemented. Notwithstanding that, we worked hard to fill the country with miscellaneous quests of all sorts. And there are plenty of these already done:

Guild of Painters NPC and a Nine Halls game set on the table to the right.
6 quests done and reviewed during this period: 6 quests were done and submitted for review: In progress: 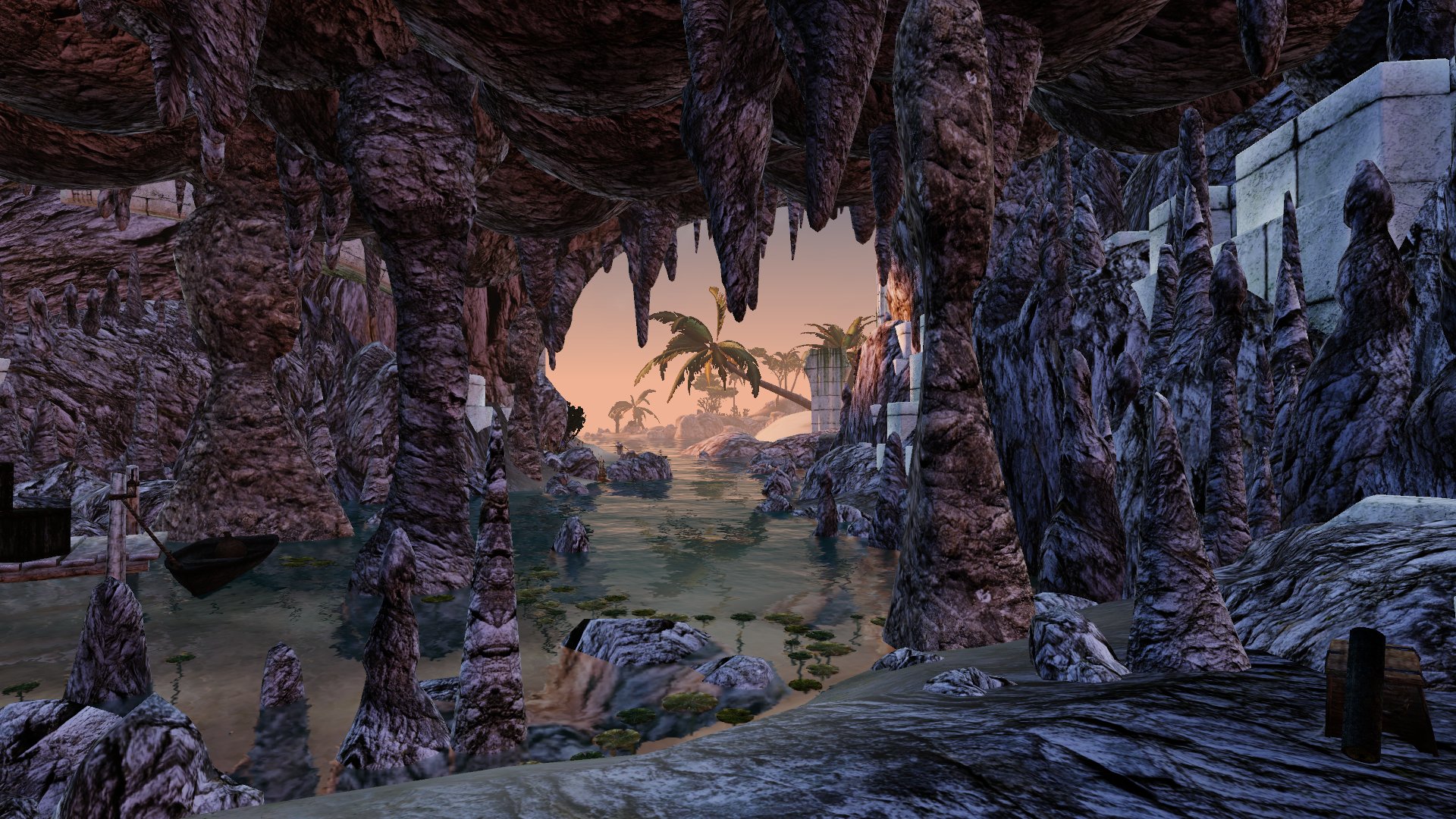 Strand Iron Mine
Many of these quests were made by new developers, as you can see. You can join and contribute just as easily and no prior experience is needed. The process requires a small quest showcase that would teach you the basics of quest development.

Conclusions
That’s it for our yearly report. Thank you for reading this far! If you have time, consider joining the development of Province: Cyrodiil. Otherwise, stay tuned on future updates and the inevitable release of the Abacean Shores!

P. S. Work on Skyrim Home of the Nords was a lot more active and wouldn’t fit in one article. It was marked with breakthroughs in the development of the Falkreath area. And the Markarth/Beorinhal release is now almost interior-complete. Keep up-to-date with the latest progress on both projects in our Discord server!
Top
Post Reply
1 post • Page 1 of 1