Hi! I'm interested in joining the project as a modeler, so, i made the Tantha creature from the unclaimed assets tab as a showcase.

(i'm not really experienced with animations, but i decided to give it a whirl anyway

first off, welcome to our forums! If you interested in chatting with other members of the project, you are invited to join our discord server where you can have much more immediate feedback and discussion and all that stuff:
https://discord.gg/RZX5mYz

Your showcase is a very pleasant surprise, since there are not many people prepared to take the effort of learning rigging and animating creatures. I would be happy to have you on our team, definitely. However there are still a few things you need to work on with regards to your creature. I will give you more detailled info on that in a separate post shortly.

Small things first:
Your texture path in the nif file is still wrong. It needs to say pc_tantha.dds, but it is texture\pc_tantha. This needs to be fixed obviously.

Second thing, also small, is data structure. If you want to submit a model for Cyrodiil. it needs to go in a subfolder of meshes/pc, in your case meshes/pc/cr. It's a secondary concern right now, but I thought I'd write it upfront. (the texture file name is good btw.)

Ok, now if I try to add your creature in the CS, I get some error warnings due to bad animation text keys:

Attack1: Start/Hit/Stop have an excess space before Attack1

Idle1: Start/Stop have the problem that Idle1 does not exist as animation group in Morrowind. You only have Idle (played only in combat between attacks/hits etc) and Idle2-Idle9. Make sure to rearrange your animation groups accordingly.

If you want a mostly complete documentation of animation groups, follow this link:
http://www.preik.net/morrowind/animationgroups.html

I'll fix these myself in your submitted files for now and will give you more feedback after testing the creature ingame.

Now when I pulled your creature into the Construction set window, I noticed a misaligned bounding box. But it seems like you didn't forget about adding one. It was just named wrongly:

. Small things like these break it of course. Have an eye on text errors of this kind.

After fixing this last thing, I playtested the creature and overall my feedback is this:

Technically the creature seems to have almost all it needs to have: Size is fitting, Bounding Box, Shadow mesh, walking, idle, attack, hit and death animations.

Most of the animations look good. But the attack animations should get a rework. Do you think it would be a good idea to involve the beak in its attacks?

The creature is technically still missing a few animation groups to behave correctly under all circumstances:

Played when the creature gets struck down by a heavly blow.

Played when the creature gets knocked out by unarmed combat. The creature should lie on the ground between Loop Start and Loop Stop

Played if the creature is killed while lying down after it was knocked down by a heavy blow. The beginning pose of the animation should be the creature lying as in the Knockdown animation.

The same as DeathKnockDown but for Knockout.

I usually use the same animation for Knockout and Knockdown because it's less effort and nobody really cares about a visual difference between these two.

Regarding the 3D-Model: I feel it would improve the creature, if you added some more shades and highlights and perhaps color variation to the fur and hands.

A quick example of what this could look like roughly:

It would also help the creature, if it had a little bit of alpha-fur here and there. Doesn't have to be much, but it would help to make the creature look lusher than currently.

Another member on discord had this feedback:

I kind of miss the ears and the horn-like brow above the eyes, perhaps that could be included in a more detailed texture.
I would also suggest making the beak larger or more prominent. For a creature of this size, slightly exaggerated attributes gives it a stronger identity.
I'm also sort of missing the fuzziness of the original concept, though that's difficult to do in MW style. Maybe a slight strip of alpha'd fur along the back or on the tail? The tail looks rather unfinished to me.

I hope this feedback is fine for you. Looking forward to your reply.


Edit: You can use the overlay mode of photoshop/gimp layers or brushes to achieve highlights on the fur.
Top

Thank you very much for the reply! All noted, I will start working on the improvements right now.
I will drop by on discord later, to introduce myself and maybe getting some feedback before posting the final version here.
Again, thanks for the reply, very informative, very excited to be part of project Tamriel!
Top

Hope it's all working!

Your updated creature looks a lot better now. I think we're pretty much set on its appearance at this point.

However, could I still ask you to make the beak open-able, just so it opens whenever a moan/roar/scream is played in animation?

The new Attack - animation looks good, as do all other animations. But it would be good to have at least an Attack2 added for visual variation in combat.

I'm going to add your creature to the game again to check if there are any technical issues left. I will also provide you some creature sounds for you to use.

And I will give you some instructions how you can set up the creature and its sounds in the Construction Set then. I'll make a separate post for that.

If you provide a final post with working creature assets and the esp for data inclusion, you will be ready for promotion.
Top

I tested the creature ingame and it seems to work all around, including all Knockdown and Knockout animations. This is really good.

See the images below to see what you need to do to setup the creature in the CS for Tamriel_Data:

The creature has 3 idles. Make sure to set up the ai settings of the creature so it uses all of them. In this example it is with roughly equal chances for each of these animations to be used. You can use different chances, if you like. 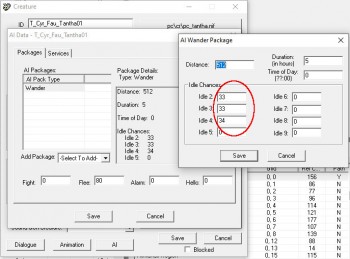 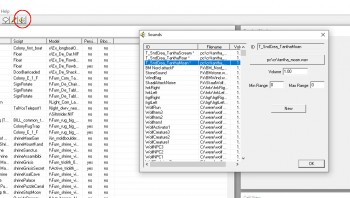 In the soundgens you assign your previously added sounds to your creature. You can also give it some of the vanilla step or fall sounds. No need to make custom sounds for these.

The final archive with the data addon should look like this in the end. 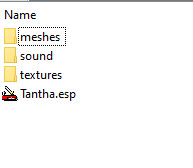 Below I also included a set of sounds for your creature, based on the sounds from freesound.org I showed to you on discord. There are two sets. Feel free to choose the one you feel fits best. You can also mixmatch these two sets, if you prefer one of the sets, but want to use a single sound from the other one etc.

Here is the ESP with the creature, i used the cave rat as reference for the stats (aside speed, which i left as the default 50.)
also added 2 new attack animations and the open-able beak!

First off, your promotion is really overdue. Therefore:

Promoted as PT-Modder!
Feel free to forage through the entrails of our inner forums! And feel free to claim whatever jobs you like.
This all said, there were only two very little things I found about your posted files:
- The creature doesn't have a shadow mesh anymore. Can you add it back?
- Very little detail: Add a "01" to the end of the id of your creature. Our naming convention has it like that.

But as said,, this is very minor.

Last but not least: Here are download links to Tamriel_Data, if you haven't downloaded it yet. Browsing through Tamriel_Data.esm is the best way to get familiar with we have at our disposal as a project:
https://www.tamriel-rebuilt.org/downloads/resources

thank's for the instuctions during the process! i'll start looking for a claim!